Cross broker cTrader has been updated to v4.5.6 and it includes a fix for this issue. Please let us know if you still experience this issue with the latest version.

I think it's useless to write here. Many have been writing about this for six months now. There is no reaction. The error is reproduced by anyone who has tried it. The developers don't see it. Well, how can that be? Most likely they have some kind of static double or similar not initialized in the terminal code. But version 4.1 works great. It would be possible to compare versions 4.1 and 4.2 step by step and find the place where the failure occurs. But for some reason the developers don't seem to be doing it. If it weren’t for some subtleties, I would have already given up on this program, since MT5 works great and in case of errors they are quickly eliminated. And here is a beautiful candy with buttons, windows and constant problems in trading. It seems that the program was not made for trading, but as a beautiful toy. But maybe I'm wrong. But the mood - with their attitude to this problem, the developers definitely spoil it.

There is already a thread about this - https://ctrader.com/forum/ctrader-support/38822

Sounds like you are on a Beeks VPS if its WS 2012 R2 (who else would be running such an old OS although I have to say Beeks VPS's are the best performing of those offered by IC Markets free VPS service just wish they'd upgrade the OS!)

No, this is PQHosting VPS. We tried on different VPS and from IC Markets - ForexVPS and others. Everywhere the same. After half an hour it is impossible to switch between windows. It does not depend on the system. We tried on Windows Server 2016, 2019 and 2022. Same thing. I think it's in the code of the terminal itself, something is uninitialized. Let's say some variable and that's why it happens. This can only be fixed by the creators of the program. But for some reason they have not done this for several months. Although the error is easily detected. I don't believe they tried and failed to reproduce. Everyone who tried to bet on VPS gets the same thing in half an hour. Most likely they are just too lazy to go to VPS. The worst thing is when you depend on unscrupulous people. But maybe I'm wrong and they tried to do something.

I had this problem back in August. It appears after half an hour of work of advisors on the VPS. My friend even sent a detailed description and pictures in Telegram to the moderator. The moderator did not even consider it proper to answer this question. Since I am a live trader all the time and this position is a money killer, I had to downgrade to version 4.1 and it works fine. Another friend of mine also put Expert Advisors on the VPS and got the same thing. So the problem is easy to reproduce. I and others have long described it step by step. I think this is in the code of the terminal itself, some variable is uninitialized and the developers cannot find this place in any way. The developers are making more and more new versions, on which it is impossible to trade on VPS. This is absurd and a bad attitude towards people. I wish them to experience what they subject people to. Written as is. Someone may not like it. I put experts on VPS. Windows Server 2012 R2.
After about half an hour trying to switch window or editor. The window images in the terminal disappear. You can only get windows back by closing and reopening the terminal. This bug appears in all versions since 4.2. Already many times wrote about this a few months ago and now - the error is not corrected. Trading on a real account with such a terminal is dangerous. Developers, please do something about this. All your innovations and all sorts of features are secondary if there is such an error and it is impossible to trade on such a terminal. Is it really difficult to install Windows Server 2012 R2 on some VPS, install an Expert Advisor, turn it on for trading and make sure that this error exists. The screen looks like this. Back in August, I wrote that the version of CTrader 4.2 is on VPS, after some time of work, if you switch the editor or charts, a black screen appears and you can remove it only by closing and reopening the terminal. You promised that this bug will be fixed. But I'm not very hopeful in all respects, remembering that version 4.1 worked well, just rolled back the version and traded on a live account without problems. Today I decided to see if the error was fixed or not. I installed the terminal version 4.2.22 on my VPS and launched the advisor. To my surprise, after half an hour of the adviser's work, the terminal screen turned black and did not switch anymore. That is, it turns out that you did not eliminate the error. And how to trade on a real account, all on the old version 4.1? I want to write harder, but okay, I'll spare your nerves. I remind you again. The VPS has a Windows 2012R2ru 8Gb system. If you are serious people, you can easily repeat what I write. I hope that after all you will fix the operation of the terminal version 4.2.22, because for now it is dangerous for real trading and is just a toy.

Look at the log of real trade. Modification of orders comes from the future? 13/10/2022? Yesterday there was something similar and we turned on the orders at the time when they should not. And the day before yesterday, the same thing and we lost decent money on this. Your program is criminal - it is very dangerous to trade in a real account.
After some time, when the program is open - switch the editor and the schedule - it becomes impossible. Many wrote you about this. But you did nothing like that.
The program is heavy. Eats RAM. It seems that some schoolboy wrote it. The decision to combine the editor and trade windows in one is bad. 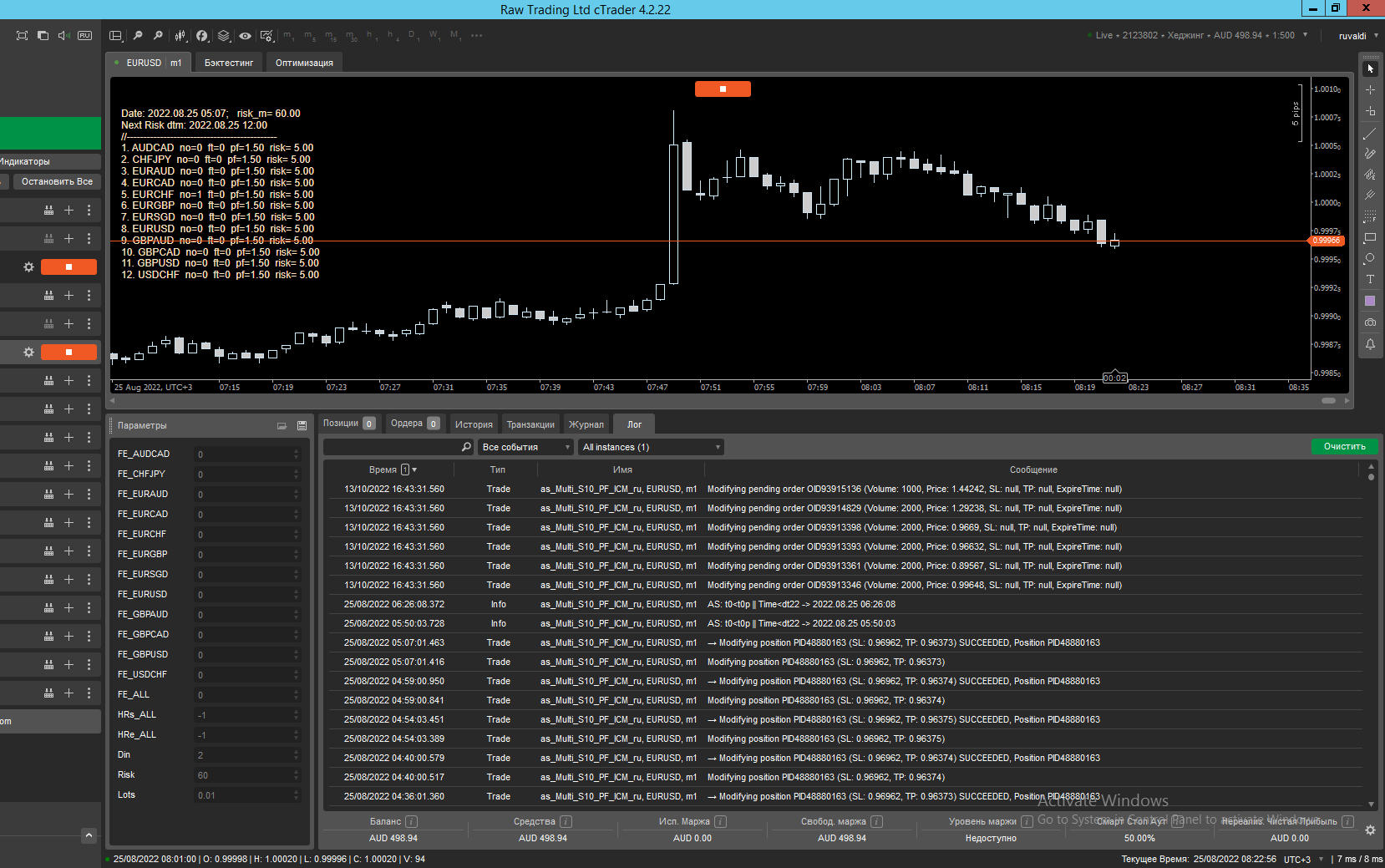 Warning! Executing cBots downloaded from this section may result in loss of funds. Use them at your own risk.